We can finally see forward to the end of this terrible smoke event over western Washington and Oregon.

But first let me show you something that will impress.   Below is a composite MODIS weather satellite image for yesterday, a picture that shows West Coast smoke extended over the entire continent.  In New York or DC this morning, people will view a hazy sky and a weakened sun from the West Coast fires; in fact, the smoke extended well into the Atlantic.

Another sobering image is a graphic produced by Dr. Beth Friedman of the WA State Department of Ecology, which shows the percentage of time that air monitoring locations in the state are in various polluted conditions (e.g., unhealthy, hazardous) over the past summers for June through Sept. 14.  Other summers (2017 and 2018) are “ahead” of this year in total percentage of time with smoke, but this summer (mainly this week) is in a class by itself for hazardous conditions.   And this graph does not include the last few days.   Simply amazing. 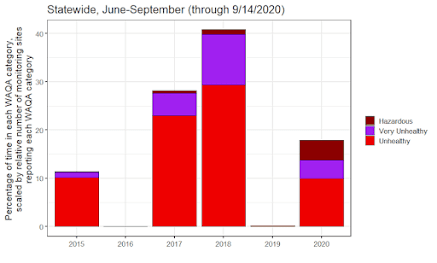 We are going to get out of this situation during the next week, but first we need to get though a smoky few days.

This morning the air quality situation at the surface remained poor for most, with the bright spots being the Oregon coast and some higher elevation locations.  Below is the EPA AirNow summary of small particle pollution.  Reds (unhealthy) and hazardous (purple) still dominate, with greens on the Oregon coast. 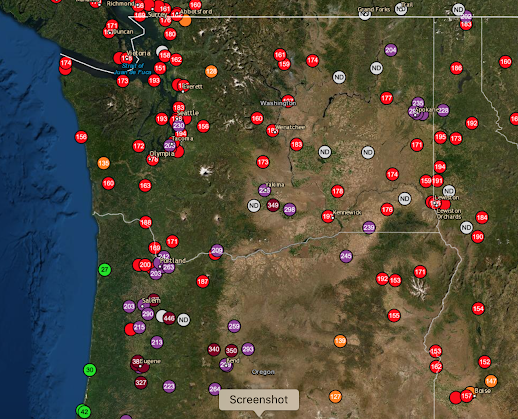 There have been some minor improvement in many locations (see Seattle below), but air quality is generally still poor.  You may have noted the sky was a bit brighter yesterday, and perhaps you even noted some blue skies overhead but hazy looking horizontally.  That makes sense because the smoke is relatively shallow so that the path through the smoke is far less when you look up.

Today will not bring major improvement because of the weather pattern, with a low offshore bringing up smoky air from the south.

The pressure, wind and temperature pattern around 3000 ft is shown below, which illustrates the situation.  The winds are not strong over the NW interior, so there is not a lot of mixing.   Furthermore, the southerly flow is bringing warm air northward, which helps strengthen low level inversion (warm light air over cold dense air), which keeps the smoke in.

But by Saturday, the pattern radically changes with low pressure over the Pacific replaced by higher pressure and southerly flow replaced by a cooler northwesterly winds (see map for 5 AM Saturday). This air will be far cleaner and considerably less stable.

The winds will still not be that strong, but this change should be enough to noticeably improve air quality.   A much stronger weather system comes in Tuesday/Wednesday, which should pull conditions back to near normal air quality and weather.

So the end is in sight.  We just have to slog through a few more days of it.  Once this situation is over, I will blog on the question of whether global warming has anything to do with it.  A number of politicians and activists are calling these wildfires  “climate fires.”  But is it true?  I have put together a lot of material on this issue, which I will describe in future post.

The End of the Smoke Situation and Why is Smoke Prediction so Hard?

Tropical Depression 22, what will you do? – Space City Weather

What Is Happening With TikTok and WeChat?

U.S. Stocks Showing A Lack Of Direction As Traders Take A Breather

Amazon’s Prime Day: Deals at Whole Foods are on the menu

New York City employees are returning to the office — is it too soon?

How the coronavirus pandemic is fueling ethnic hatred