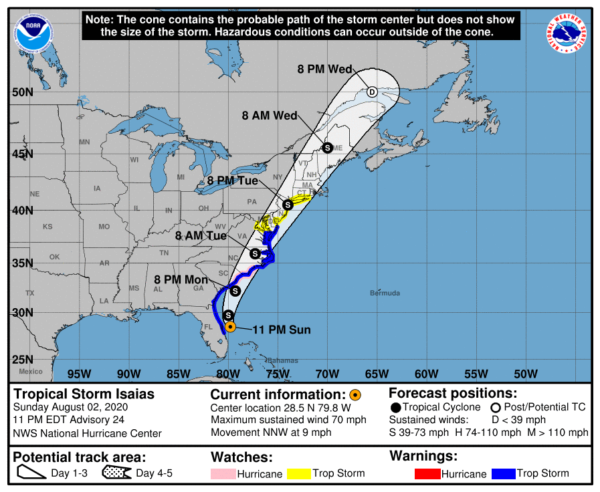 SUMMARY OF WATCHES AND WARNINGS IN EFFECT

At 1100 PM EDT (0300 UTC), the center of Tropical Storm Isaias was located by an Air Force Hurricane Hunter aircraft near latitude 28.5 North, longitude 79.8 West. Isaias is moving toward the north-northwest near 9 mph (15 km/h), and this general motion is expected to continue through tonight. A turn toward the north and north-northeast along with an increase in forward speed is anticipated on Monday and Tuesday. On the forecast track, the center of Isaias will pass just to the east of the Florida east coast through tonight. The center of Isaias will then move offshore of the coast of Georgia and southern South Carolina on Monday, move inland over eastern South Carolina or southern North Carolina Monday night and move along the coast of the mid-Atlantic states on Tuesday.

Maximum sustained winds are near 70 mph (110 km/h) with higher gusts. Some fluctuations in strength are possible during the next 36 hours, but Isaias is expected to be a strong tropical storm when it reaches the coast of eastern South Carolina or southern North Carolina Monday night. Slow weakening is forecast after Isaias makes landfall in the Carolinas and moves across the U.S. mid-Atlantic region late Monday and Tuesday. 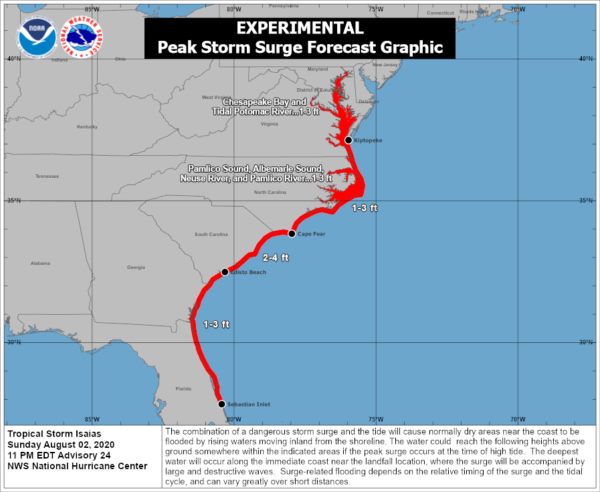 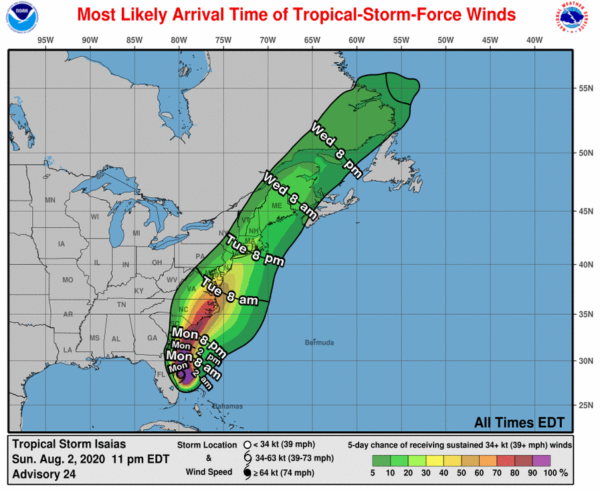 2. Tropical storm conditions will spread northward within the Tropical Storm Warning area from Florida to Maryland through early Tuesday. Isaias is expected to be near hurricane strength when it reaches the coast of northern South Carolina and southern North Carolina Monday night, and strong tropical-storm-force winds are likely with hurricane conditions possible in the Hurricane Watch area.

3. Heavy rainfall from Isaias will continue to result in potentially life-threatening flash flooding in the Northwest Bahamas through tonight. Flash and urban flooding, some of which may be significant in the eastern Carolinas and the mid-Atlantic, is expected through midweek along and near the path of Isaias across the East Coast of the United States. Widespread minor to moderate river flooding is possible across portions of the Carolinas and the mid-Atlantic.

4. Tropical storm conditions are forecast to spread northward across the remainder of the U.S east coast on Tuesday and early Wednesday. A tropical storm watch is in effect through Long Island Sound and additional watches and warnings will likely be issued on Monday.

1:00 PM (Fri) | *Get out the Greek alphabet…”Wilfred” has been taken…Hurricane Teddy to effect Bermuda then it may directly impact Nova Scotia…Gulf system continues to meander…a threat for Texas* — Perspecta Weather

How to Ship a Vaccine at –80°C, and Other Obstacles in the Covid Fight

USDA plans additional $14B for farmers reeling from virus

‘This is a big moment:’ UK virus restrictions escalating

The Energy 202: Many California Republicans side with Trump in dismissing climate change as wildfire cause

How to Ship a Vaccine at –80°C, and Other Obstacles in the Covid Fight