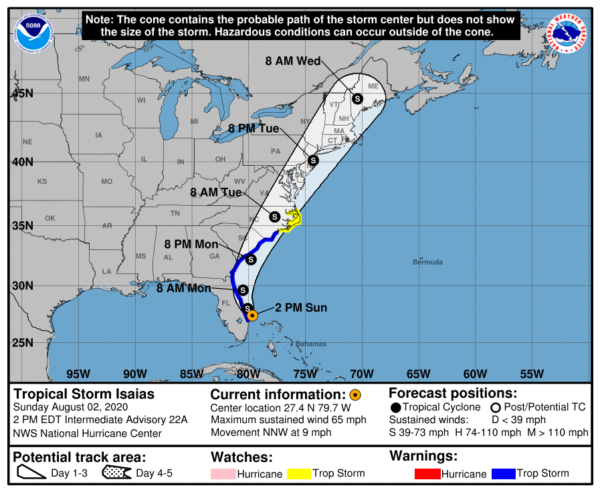 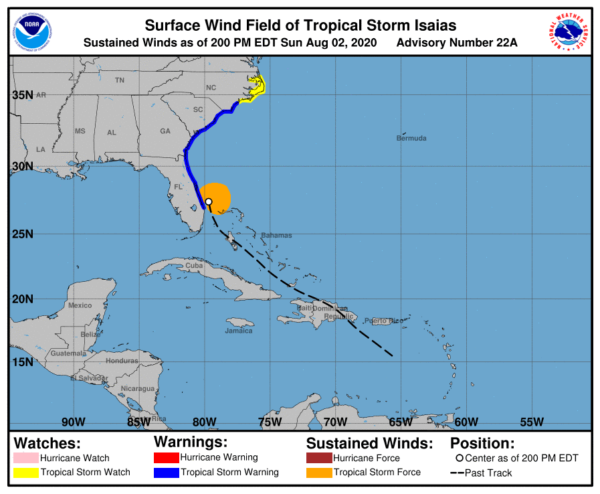 At 200 PM EDT (1800 UTC), the center of Tropical Storm Isaias was located by an Air Force Reserve reconnaissance aircraft and NOAA Doppler weather radar near latitude 27.4 North, longitude 79.7 West. Isaias is moving toward the north-northwest near 9 mph (15 km/h) and this general motion is expected to continue through Monday morning. A turn toward the north and north-northeast is anticipated on Monday and Tuesday with an increase in forward speed. On the forecast track, the center of Isaias will move near the east coast of Florida today through late tonight. On Monday and Tuesday, the center of Isaias will move from offshore the coast of Georgia into the mid-Atlantic states.

Data from the aircraft and the Melbourne, Florida, Doppler radar data indicate that maximum sustained winds are near 65 mph (100 km/h) with higher gusts. Some fluctuations in strength will be possible during the next 48 hours.

The minimum central pressure based on reports from the reconnaissance aircraft is estimated to be 995 MB (29.39 inches).

STORM SURGE: The combination of a dangerous storm surge and the tide will cause normally dry areas near the coast to be flooded by rising waters moving inland from the shoreline. The water could reach the following heights above ground somewhere in the indicated areas if the peak surge occurs at the time of high tide… 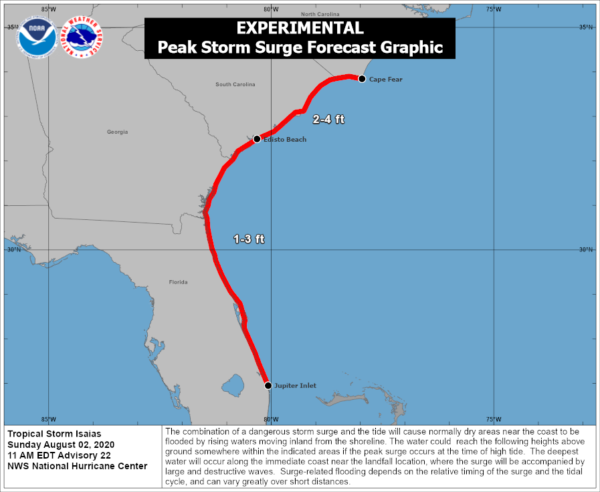 The deepest water will occur along the immediate coast in areas of onshore winds, where the surge will be accompanied by large waves. Surge-related flooding depends on the relative timing of the surge and the tidal cycle and can vary greatly over short distances. For information specific to your area, please see products issued by your local National Weather Service forecast office. 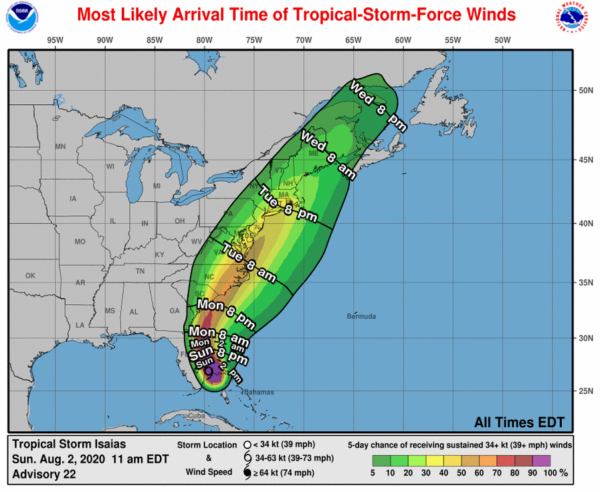 Tropical storm conditions are possible in the watch area in North Carolina on Tuesday.

RAINFALL: The following rainfall accumulations are expected along and near the track of Isaias:

Northwest Bahamas: 4 to 8 inches, with isolated maximum totals of 12 inches.

Eastern Florida: 2 to 4 inches, with isolated maximum totals of 6 inches.

Carolinas and the mid-Atlantic: 3 to 5 inches, with isolated maximum totals of 7 inches.

Southeast New York and much of New England: 2 to 4 inches, with isolated maximum totals of 6 inches. 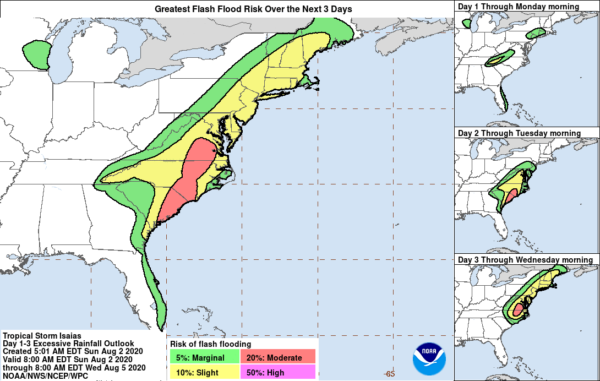 Heavy rainfall from Isaias will continue to result in potentially life-threatening flash flooding in the Northwest Bahamas through tonight. Flash and urban flooding, some of which may be significant in the coastal Carolinas and Virginia, is expected through midweek along and near the path of Isaias across the East Coast of the United States. Widespread minor to isolated moderate river flooding is possible across portions of the Carolinas and Mid-Atlantic.

SURF: Swells generated by Isaias are affecting portions of the Bahamas and the southeast coast of the United States and will spread northward along the U.S. east coast during the next few days. These swells are likely to cause life-threatening surf and rip current conditions. Please consult products from your local weather office. 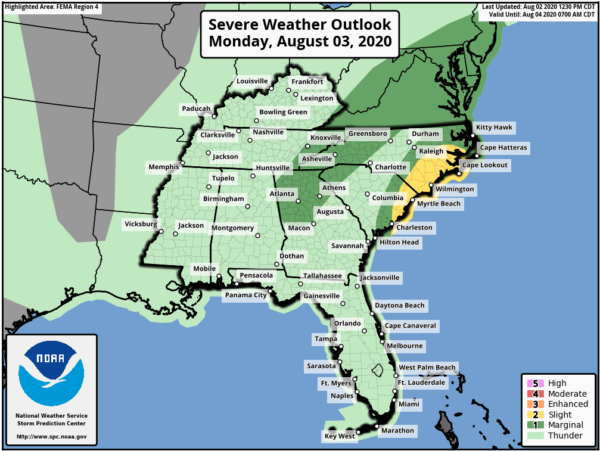 TORNADOES: The potential for a couple tornadoes will begin along coastal South Carolina during the late afternoon and evening on Monday, spreading across eastern North Carolina on Monday night.

1:00 PM (Fri) | *Get out the Greek alphabet…”Wilfred” has been taken…Hurricane Teddy to effect Bermuda then it may directly impact Nova Scotia…Gulf system continues to meander…a threat for Texas* — Perspecta Weather

USDA plans additional $14B for farmers reeling from virus

‘This is a big moment:’ UK virus restrictions escalating

Biden and the Swamp Economy

The Most Famous People in America

Solutions and Other Problems: The Poop Mystery

Emails Detail Effort to Silence C.D.C. and Question Its Science