We’ve got a lot of moving parts in the forecast for the next week or so, with each one helping shape what the next one will do. The first big item is our late week front, which seems to be on track. The second item is the tropical disturbance off Mexico that many of you have expressed interest or concerns in, so we’ll explain how those two interact and what it could mean.

Wednesday should be a sunny, hot day. We should see at least a few showers and storms crop up, perhaps more likely north and west of Houston. But I think most of us will be dry. Look for highs in the low- to mid-90s area-wide.

For tomorrow, a disturbance in the upper atmosphere is going to approach southeast Texas. We should see more cloud cover Thursday, and we may even have showers in the area by sunrise. As the day goes on, we’ll call it partly to mostly cloudy with scattered thunderstorms developing. After a morning low in the muggy 70s, look for highs in the low-90s or a touch cooler north and west.

Friday to Sunday and cold front

Last week’s cold front was an “in your face” type of frontal passage, where once the front passed your backyard, you knew it was there. I’m not sure this next front will be quite like that. Look for perhaps some showers Thursday night and Friday morning. They’ll drop south on Friday and any more organized storms should focus south of I-10 to the coast before dissipating late. The front itself will lag a bit, but it is expected to pass the northern half of the area Friday morning and afternoon, and it should eventually reach the coast by Friday night or early Saturday. Instead of a sharp change, we will likely see a gradual drop in humidity and clearing later Friday into Saturday.

Yes, Saturday morning should see low temperatures in the 60s away from the city and the coast. (Weather Bell)

Both Saturday and Sunday look like fine early autumn or late summer days with ample sunshine. A few morning clouds are possible Saturday south of Houston. We will still see highs in the upper-80s to near 90°, but the humidity will be tolerable.

Can the front fail? It’s plausible that the front doesn’t push quite as aggressively offshore, but trends since yesterday have been toward a slightly stronger push and the front basically dissolving 100 to 200 miles offshore. So we think that this is real.

Next week’s forecast will be heavily determined by just what the front does when it’s offshore. There’s a bit of uncertainty around that, but our base case today will be that it gets 150 miles or so offshore and just basically dissolves. High pressure behind the front, helping along our nice weekend, will settle in with influence about halfway down the Texas coast into early next week, keeping any tropical moisture from the Gulf disturbance suppressed well to our south.

The National Hurricane Center has boosted development odds of that system to about 60 percent over the next five days. 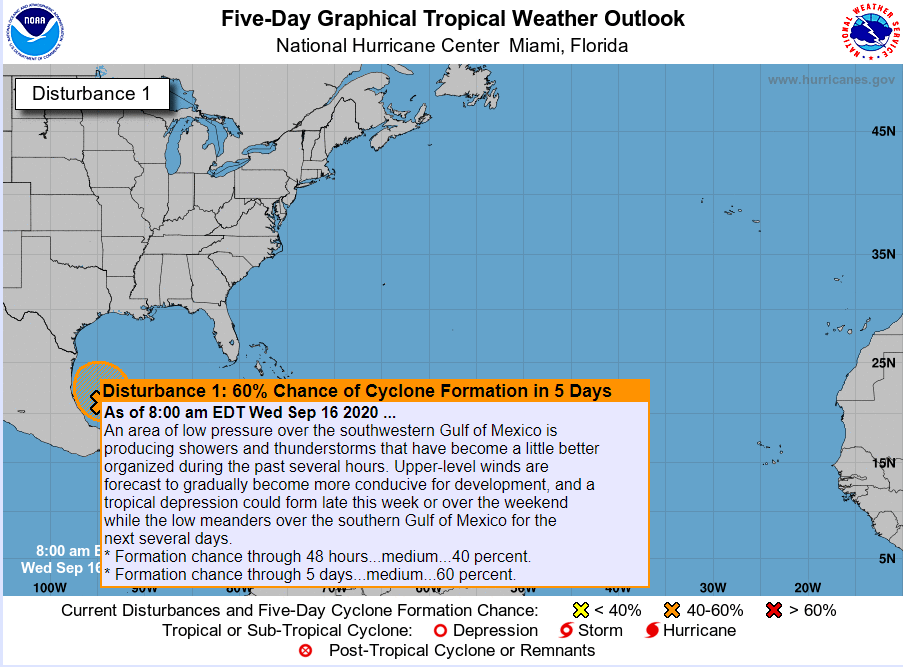 The NHC is assigning a 60% chance that this Bay of Campeche system will develop over the next 5 days, but it will remain well to our south during that time. (NOAA)

Again, keep in mind that at least through early next week, whatever develops down that way is likely to stay down that way, so we don’t need to worry about this system through at least Monday or Tuesday. As of now, both days look sunny and warmer, with a slow creep of returning humidity and highs in the 80s or low-90s and lows generally in the 70s.

From here, forecast confidence drops a bit. There are options. The disturbance could develop into a tropical depression or storm and just meander around the Bay of Campeche, slowly intensifying. It could develop and move inland over Mexico. It could never develop and remain a disjointed “blob” of moisture. Whatever the case, it’s likely that at least the fringe moisture from the broader unsettled pattern south of us will creep north next week, introducing a chance of scattered showers to the forecast by Wednesday or Thursday, especially south of Houston.

Over the next 7 days, you can see that the vast majority of rainfall is expected over the open Gulf. What is important to note on this map is that the gradient of rainfall tight, or where we go from little rainfall to healthy rainfall occurs over a relatively short distance. 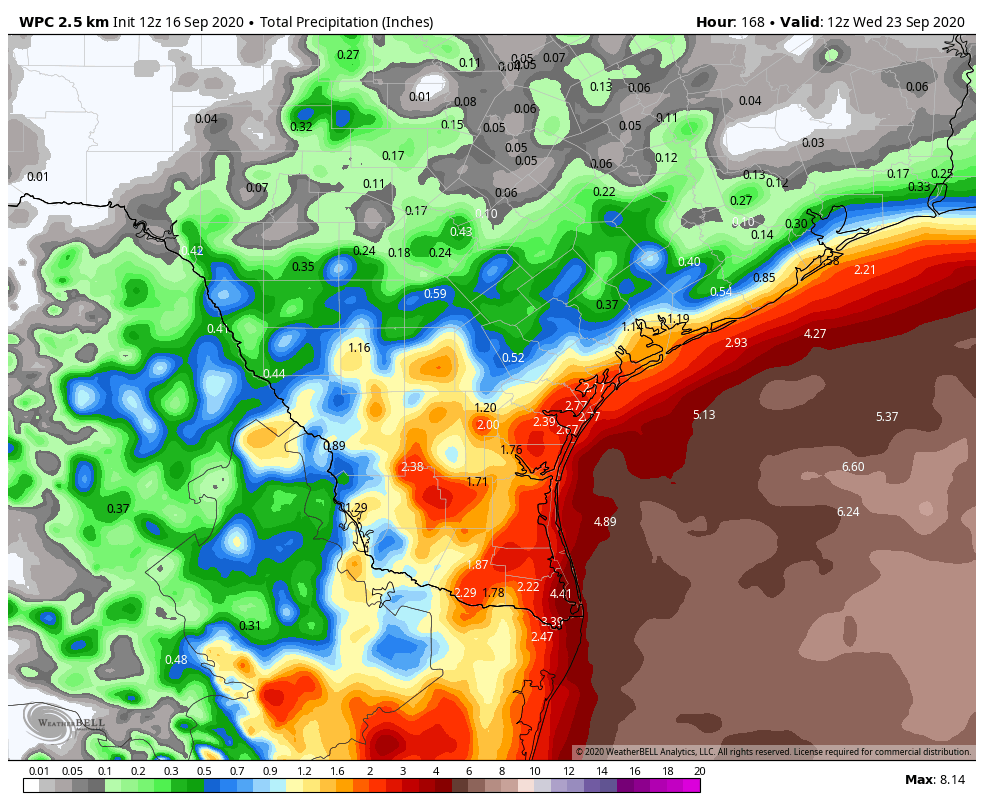 The heavy rain affiliated with the Gulf disturbance is likely to stay well to our south through most of next week, but coastal areas could see higher rain chances at times from midweek onward. (Weather Bell)

So trying to determine how far south the influence of high pressure lasts and for how long that occurs is pivotal in determining whether most of this rain stays completely out of our area or if it can creep closer to places like Freeport and Galveston. We expect the northern parts of the area south to probably US-59 to remain mostly dry through mid to late next week.

Could an organized tropical system come north to our part of Texas? It’s not impossible, no, and if you’ve looked at the GFS model, at times it has flashed this possibility. The vast majority of storms that have historically formed in that region this time of year either go due west into Mexico or north and northeast into Louisiana or the Central Gulf. There are a couple exceptions (the 1949 hurricane for example) but not many. So for now this is really still just a “keep an eye on this area” type thing.

At the least, we should see increasing seas, rip currents, and perhaps some minor coastal flooding try to develop by next week.

We will know bits and pieces more about this area to watch each day moving forward, so we will obviously keep you posted.

Keeping in line with 2020 trends, Sally strengthened into a category 2 hurricane before making landfall near Gulf Shores, AL this morning with 105 mph maximum sustained winds.

#Sally has made landfall near Gulf Shores Alabama at 445 AM CDT as a category 2 hurricane. Maximum sustained winds were 105 mph with a minimum central pressure of 965 mb. More: https://t.co/tW4KeFW0gB pic.twitter.com/zdyilBhdic

Sally continues to dump copious amounts of rain, in addition to lingering surge issues, which is causing major to historic flooding for parts of southern Alabama and the western Florida Panhandle. Upwards of 30″ of rain has been reported in Pensacola, with still a bit more to come. Sally will exit to the north and northeast, slowly moving across Alabama and Georgia today and tomorrow.

The End of the Smoke Situation and Why is Smoke Prediction so Hard?

Commerce Department bans downloads of TikTok and WeChat in U.S.

What Is Happening With TikTok and WeChat?

U.S. Stocks Showing A Lack Of Direction As Traders Take A Breather

Amazon’s Prime Day: Deals at Whole Foods are on the menu

Are you a lazy mountain biker? There’s a crazy expensive ebike mod for that